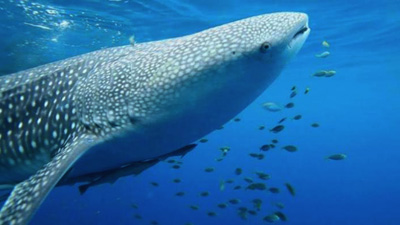 Lots of joys are offered by Derawan Islands, which is located in East Kalimantan Province. One of them is a nautical adventure in Taliyasan Sub-district. To be exact, it is in its fishing harbor where tourists can witness whale-sharks directly. According to scientists, there are about 10 whale-sharks living in such area and their size is up to 7 meters! Due to their presence, tourists choose Taliyasan as one of their best vacation destinations when visiting Derawan. It is because they want to swim along with those majestic creatures and take some pictures of them.

The Nuance
Taliyasan Sub-district is located near to the sea. No wonder, most of the villagers work as a fisherman and they park their boats in the nearby fishing harbor. Apart from hunting fishes, they also earn money by helping tourists to reach the whale-shark point. Some of them even work as a professional instructor. When it comes to nuance, the fishing harbor is crowded by people and boats. Many traditional houses are also seen in the location. Not to mention there is a big bridge! The nuance is quite traditional and rustic, so it gives comfort to visitors.

Exploring Whale-Shark Point
The best time to visit Taliyasan’s Whale-Shark Point is in November when the waves are friendly. It is also the time when fishermen remove their “Bagang” (fish traps) to other locations. That means it the chance is higher to meet the whale-sharks. For brave tourists, it is even possible to swim and get near to those creatures. As long as they come with a guide, they are safe. Also, it is important to follow basic procedures in getting near those gigantic nautical creatures. Despite their calm appearance, their size can be quite damaging.

The fact is fishermen would return unqualified fishes to the sea. These fishes would attract whale sharks in the location, actually. During the feeding, tourists have the chance in taking pictures and witness the procession. The mouth of those creatures is indeed big! They have no teeth, though. They might suck the small fishes in an efficient manner, just like a vacuum cleaner! When it comes to transportation, people tourists can take advantage of a fisherman’s boat. The rent fee is quite affordable, in fact.

As mentioned before, it takes several precautions before diving and getting near to whale-sharks. The most common rule is that tourists aren’t allowed to touch those creatures! Even feeding the animals is prohibited. What about taking pictures? Well, it doesn’t cause any harm as long as they turn off the flash feature. The safest distance is about 6 meters. Not only whale sharks’ body can cause fatal injuries, the waves or current are also considered dangerous. In a nutshell, it is better to follow any instructions given by the guide. That’s all.

How to Get There
For outsiders, the first destination is Balikpapan City. Travelers can take an airplane and head to Sultan Aji Muhammad Sulaiman Airport. From there, they can rent a local transportation service to Berau District. The trip takes about 14 hours and the distance is 564.1 km. When it comes to the best route, it is Ahmad Yani Street.