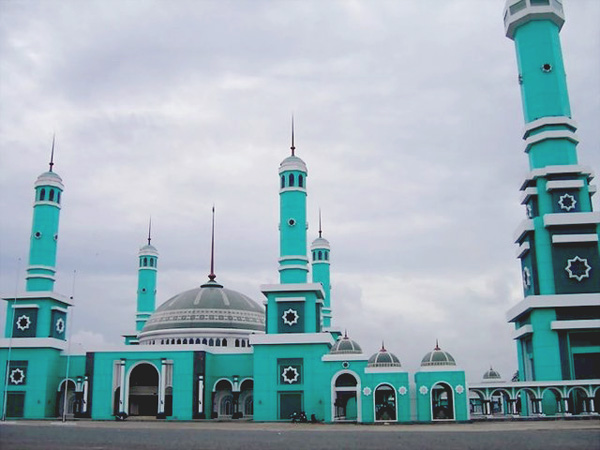 Being a recommended vacation destination in Indonesia, Derawan Islands offers lots of tourist spots to travelers. Apart from nature and culture tourism, it is also famous for its religious tourism. For example, there is a famous mosque in Tanjung Redeb Sub-district called Baitul Hikmah. That great mosque is the considered one of the biggest mosques in Kalimantan Province, including Samarinda Islamic Center. Aside from being a place for worshipping, it also becomes an interesting tourist spot for visitors. Travelers drop by in the location to witness its majestic structure and take a rest for a while before continuing their adventure.

The Nuance
Being a great mosque, Baitul Hikmah has an enormous size. It doesn’t have luxurious features, though. The main color of the mosque is green and it has 4 primary pillars. The main entrance is quite tall, as well. Inside, it shows a neat and clean environment. Thanks to the management. Local Muslims come to the mosque to do daily worshipping, as well. Not to mention the mosque would be quite crowded during special events like Eid Al-Fitr and Eid al-Adha. For those who want a more peaceful nuance, it is better to come outside of the five-time prayers.

For tourists, the mosque can be either a worshiping place or a religious tourist spot. In fact, there is a special program called “Tabligh Akbar”, which is conducted once in two years. Moreover, both local and foreign Moslems are allowed to join it. What’s more? The mosque is also famous for its tower. The tallest one reaches up to 70 meters and it provides numerous benefits to its surrounding. For example, the locals use it as a cellular phone tower. Not to mention many swallow nests in it. Such valuable commodity becomes an extra income for the mosque, in fact.

As for visitors, the prime tower of Baitul Hikmah Mosque can be a perfect site for sightseeing. The best thing is there is a lift in it. That means visitors can reach the top of the tower without hassles. There are several rules, though. A single trip to the top of the tower is only available for 20 people. Also, they can only spend up tp 15 minutes to enjoy views from above.

How to Get There
First, travelers need to take a plane and head to Balikpapan City. Once they reach Sultan Aji Muhammad Sulaiman Airport, their next destination is Berau District (Tanjung Redeb Sub-district). Next, they can directly head to Karang Ambun, where Baitul Hikmah Mosque Resides.