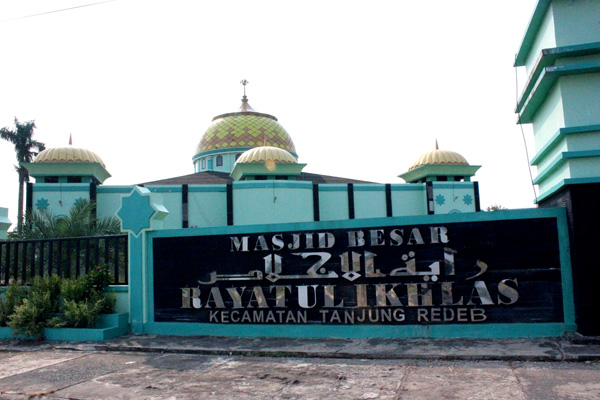 Here is the fact. Berau District has other attractions for tourists apart from Derawan Archipelago. Just because tourists are going to enjoy a good vacation, doesn’t mean their destinations should be nature tourist spots! Religious tourism also becomes an interesting option these days. That means people visit some mosques, churches, temples, or other religious sites in order to learn something or just enjoy the nuance. In this case, Rayatul Ikhlas Grand Mosque becomes a good reference for those who are visiting Berau. Not only the mosque has a majestic design, but it also emits a peaceful atmosphere.

The Nuance
The color of the mosque is predominantly green and the domes are golden. Rayatul Ikhlas Grand Mosque is not quite big, though. It doesn’t even have the second floor. Despite the fact, it can accommodate both prayers and visitors. Not to mention the mosque has several features, including a tower, gate, and parking area. There is even a name on the gate near to the street. Overall, the mosque appears majestic and beautiful. It stands out among other neighboring buildings, as well. No wonder, tourists can easily notice it from afar.

Exploring Rayatul Ikhlas Grand Mosque
One thing that visitors should do is to learn the history of the mosque. According to the locals, the original building was located near to a river. The motive of the relocation was related to the size. In the past, Rayatul Ikhlas Grand Mosque couldn’t accommodate too many prayers. Thus, the government decided to relocate it and increased its size a bit. Another fact is that the mosque has undergone several renovations. At least, it has been renovated three times. No wonder, the condition is quite good right now.

For tourists, they can do many things in the mosque. Photography is a common activity, actually. Both the design and the nuance of the mosque are quite mesmerizing. Somehow, it provides calm to visitors. That means the mosque is suitable for relaxation, as well. As long as tourists don’t come during the five-time prayers, they can explore the building without hassles. Also, they need to honor any prayers who come to the mosque. Another great time to come to Rayatul Ikhlas Grand Mosque is during any special religious events. Tourists can even join those events once they get permission from the management.

As for the tips, tourists need to gather as much information as possible regarding the rules in entering the mosque. This may prevent any mistakes when exploring the building. As visitors, they also need to wear proper clothes. At least, they must be neat and clean. Not to mention they must avoid entering the mosque by sandals or any footwear. It is a holy place, after all. Another important rule is that visitors are not allowed to make noises and havoc inside the building.

How to Get There
From Balikpapan City, travelers can take a local transportation service to Berau District. The first checkpoint is Tanjung Redeb Sub-district, actually. The distance between Balikpapan and such location is 584 km and the trip takes about 14 hours. The best route to use is Ahmad Yani Street and tourists can directly head to RA Kartini Street, where the mosque is located.