Learning the History of the Gunung Tabur Kingdom in Berau District, East Kalimantan 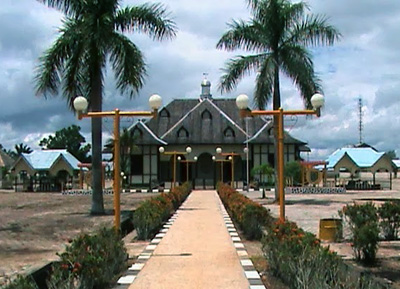 Once tourists have enjoyed island hopping in Derawan Islands, they need to head to Berau District. Why is that? One of the reasons is to learn a valuable history of Gunung Tabur Kingdom. Tourists can even visit a famous reminiscence of such Sultanate, which is located near to Sagan River. A majestic building resides in that location, which is called Gunung Tabur Palace. Another palace is also available near to Kelay River, actually. This one is called Sambaliyung Palace. In order to gather information regarding the history of Berau, tourists can take advantage of either a tour guide or the locals. Overall, historical tourism is quite worthy!

The Nuance
Berau District holds lots of stories back then. No wonder, many tourists decide to come to the location to learn about them. Those who are interested in history, they can explore all parts of the region, especially in Batiwakkal Museum. As an alternative, they must visit Sambaliyung Palace! Both of those sites are worth a visit, after all. Not to mention each of them stores valuable items that are related to Gunung Batur Sultanate. It gives an opportunity to visitors to take pictures of those items, as well.

Exploring Berau District
The most important thing to do in Berau District is to learn its history. The locals may tell visitors about Gunung Tabur Sultanate, as well. According to history, Gunung Tabur and Sambaliyung were fractions of Berau Kingdom. The separation was caused by the Dutch, actually. In the past, the invader applied “devide et empera” in order to weaken local kingdom. The purpose was to take over nature resources in Berau. At the same time, Islam entered Berau and it had a wonderful acceptance among the locals.

A tour guide might also tell about the invasion of Japan in Berau District. It was in Teluk Bayur and the Nippon took over other strategic areas like Gunung Tabur, Tanjung Redeb, and Sambaliung. For some tourists, all of those stories seem uninteresting. However, the others may consider them valuable. Even some historians often come to Berau for gathering more information about its history. As an alternative, tourists can use their camera and take some pictures of all historical items, including those that are stored in Batiwakkal Museum.

At the end of the adventure, tourists can visit beautiful tourist spots nearby. For those who love snorkeling, they must head to Kaniungan Island. Sulaiman Bay and Labuan Cermin Lake are also suitable for water sports! With all these options, no one may regret visiting Berau District. Not only they have the chance to learn local history, but they can relax in many stunning tourist objects. Not to mention the cost in exploring Berau is quite affordable, as long as they don’t come during the high season.

How to Get There
For outsiders, the first destination is Sultan Aji Sulaiman Airport, which is located in Balikpapan City. Once they get there, the next trip is by local transportation service and it takes about 13-14 hours, depending on the traffic. The distance between Balikpapan City and Berau District is 564.1 km, after all. When it comes to the best route, tourists can use Ahmad Yani Street.