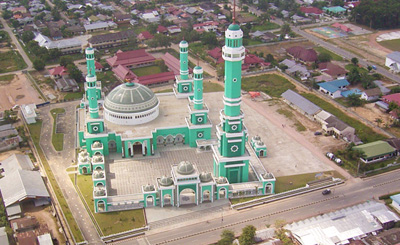 For travelers, Berau District becomes a good checkpoint prior to heading to Derawan Islands. It is the home of Tanjung Batu Port and many tourist attractions. That means Berau City also becomes a good choice when it comes to tourism. From the location, visitors can also drop by to several hills and beaches! Not to mention they have the chance to meet different tribes with their distinct cultures. These include Java, Dayak, Banjar, Bugis, Madura, and even Chinese People. Apart from nature and culture tourism, Berau offers majestic buildings and parks!

The Nuance
The size of Berau District is roughly 34,127.47 km2.  The fact is it covers up to 13.92 % of East Kalimantan Province. When it comes to population, it has more than 191,800 citizens. As mentioned before, it consists of both land and sea. Not to mention Berau is rich in limestone, especially in Kelay Sub-district. What about the culture? Well, people who live in Berau come from different tribes, especially Dayak. Most of them work as a miner and hunter, actually. The rest community has an office or tourism career.

Exploring Berau City
For those visiting Berau District, it is better to know a bit history of the city. It is true tourists come to the location to learn a history of Berau Sultanate. The kingdom occurred in the 14th century, in Lati River. According to the history, the first leader was Baddit Dipattung. He even got his title, which was Aji Raden Surya Nata Kesuma. Tourists who want to learn more about it can rely on the service of a tour guide or the locals, actually. This explains why some historians also want to visit Berau someday.

What’s next? The fact is that Berau District is also popular for its nature tourism. The most popular destination is Labuan Cermin Lake. Such beautiful tourist spot is suitable for both swimming and relaxation. In fact, some people visit the lake to do snorkeling. There is even a facility to rent snorkel gear and life jacket. As an alternative, there is also a good location to go swimming and snorkeling. It is called Sulaiman Bay. The beauty is similar to that of Labuan Cermin, after all.

The next adventure is in Kaniungan Island. In this case, tourists need to rent a speedboat to such island. Approximately, the voyage may take about 30-50 minutes, but it depends on the number of tourists and weather. Once they get to the island, they can start looking for some snorkeling spots or just explore the island. There are two options, which are Kaniungan Besar and Kecil. Both of them offer distinct attractions and atmosphere, as well. At the end of the adventure, tourists should get back to Berau City and enjoy some local foods like Ancur Paddas Porridge, Puncak Rasul, Pindang Mannung, Singgang Shrimp, Jarang Asam, etc.

How to Get There
For outsiders, the first destination is Balikpapan City and the best transportation is an airplane. Once they arrive at Sultan Aji Muhammad Sulaiman Airport, they can simply head to Berau District by local transportation service. It takes about 14 hours and the best route is Ahmad Yani Street.