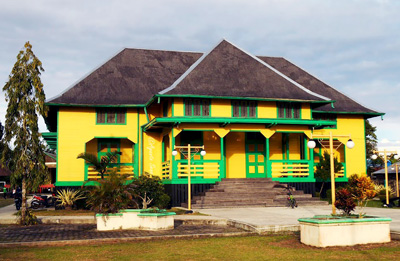 After exploring Derawan Islands, the next adventure will be in several regions of Berau District. A vacation doesn’t have to involve nature all the times because tourists can enjoy both history and culture as well. As for the reference, there is Sambaliung Palace, which is located in Sambaliung Sub-district. It is the reminiscence of the Tanjung Kingdom, which was once the part of Berau Sultanate. The site is suitable for those who like culture tours. The building has been there since 1881 and it retains its design until now. Today, it becomes a recommended tourist spot for those visiting Berau District.

The Nuance
Sambaliung Palace is located near to Kelay River. Due to its unique Chinese architecture, tourists can easily notice it. The building is made of ironwood, which is strong and durable. Now wonder it remains in a good condition despite its age. Inside the palace, there are 12 bedrooms and 1 main room. Such main room is located in the midst of the building and it is used for traditional ceremonies. That room is also used as a place to give a nobility status to someone. In its terrace, there are some parks and a gate.

Exploring Sambaliung Palace
The question is what tourists can do in Sambaliung Palace. The building displays historical items of Sambaliung Sultanate like an inscription monument made of ironwood. Such inscription was written in Arabic and Malayan letters, which are quite interesting. It tells the rules of Sultan’s attitude when sitting in front of a house. Apart from the epigraph, there are two monuments featuring Lontara scripts, which belong to Bugis Tribe. These monuments are located in front of the palace. Tourists are allowed to take pictures of those monuments, as long as they have obtained permission from the keepers.

The next attraction is the presence of a giant crocodile! It is not alive, though. Such preserved crocodile has the length of 4 meters and is kept in a glass aquarium. The thing is no accurate information or details regarding that majestic creature. Still, it becomes a perfect object for photography. The size itself is jaw-dropping! Not to mention it comes with scary teeth and a majestic pose. Unfortunately, visitors are not allowed to touch it. The crocodile is kept well in the glass in order to retain its condition.

What’s next? Sambaliung Palace also becomes a place to enjoy traditional dances and ceremonies. The most famous one is Jepen Dance. Sometimes, local artists also perform Mamanda and poetry chanting. There is even a cultural feast, which is done by the royal family. The most common one is a traditional wedding. For tourists, all of those attractions can be seen during special moments. Therefore, it is better to review the schedules prior to visiting the palace.

How to Get There
It is easy to reach Sambaliung Palace. First, travelers need to reach Tanjung Redeb, which is the capital of Berau District. The best transportation is an airplane and the destination is Kalimarau Airport. From there, tourists can simply take local transportation service to Sambaliung Sub-district. The palace resides near to Kelay River and numerous facilities like eateries and shops.