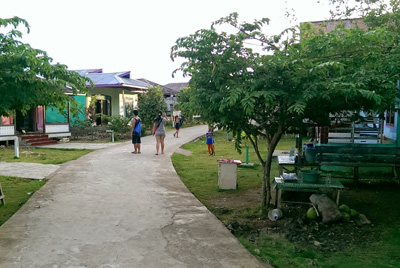 Derawan Archipelago is another amazing location to spend holidays. It is located in Berau District and belongs to East Kalimantan Province. Featuring several big islands, small isles, and shoals, it is a great destination for those who love island hopping, adventure, water sports, and photography. What’s more? Derawan is also famous for its culture, as it offers exotic villages to visit. One of them resides in Maratua Island, which is called Bohesilian. It is the oldest village in Maratua Sub-district and becomes a recommended tourist spot to learn its culture and enjoy the nature.

The Nuance
The majority of people who live in Bohesilian Village belong to Bajo Tribe. They came from Sulawesi Island and have been living there for generations. Some of the villagers belong to Bugis Tribe, which also came from Sulawesi. No wonder, most of those people work as a fisherman and several boats are seen there. Despite its traditional way of living, the villagers have built numerous facilities like a football field, mosques, government-mandated community health clinics, and much more. Even it provides different types of transportation services, including ojek (local bike transport) and speedboats.

Exploring Bohesilian Village
What is Bohesilian Village to tourists? Well, it is famous for its simple and peaceful way of living. Visitors can get around the village and enjoy its serenity. The locals live in a humble manner and they have a friendly personality. Even their house looks traditional, which is made of local woods. In front of the house, a small yard with grasses and traditional benches seem alluring. Tourists can also get closer to the natives by visiting their house. Have no worries. It is quite possible, as long as they know how to talk with them.

The next fun activity is to witness locals’ activity in the sea. Fishermen only look for fishes when their supply starts to run out. Once they return from fishing, they might sell the fishes and earn more than 20 million from the trade. This amount of money helps them to survive for about one month, actually. Lucky visitors would be able to join those fishermen, looking for fishes in the sea. It is quite rare, though. Fishing is not a recreation for them, so it must be done professionally.

For those who decide to spend the night in Bohesilian Village, they must adapt to its condition. The fact is the village hasn’t received enough support from PLN or State’s Electricity Company. No wonder, each household owns an electricity generator. Despite such condition, people of Behesilian live happily and in a prosperous way. Thanks to the abundant nautical sources, especially fishes. Recently, tourists also bring prosperity to the village. Some villagers offer a tour guiding service to visitors and earn money from it.

How to Get There
The fastest way to reach the first checkpoint (Berau District) is by airplane. Travelers can take an airplane to Kalimarau Airport in Tanjung Redeb. From there, they can rent a taxi to Tanjung Batu Port, which takes about 2 hours. The next checkpoint is Derawan Island, and tourists can ride a speedboat to reach it. Another boat is needed to reach Maratua Island later.

Where to Stay
Maratua Paradise Resort