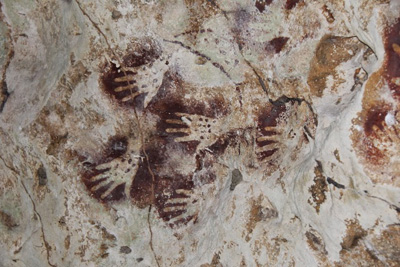 When visiting Derawan Islands, tourists should take the chance in exploring Berau District. A historical cave resides in Kelay Sub-district, which is called Beloyot. To be exact, the location is in Merabu Village and it is quite popular among travelers. Apart from its historical value, the cave is suitable for trekking. The reason is visitors need to spend 2 hours of walking from nearby village to the site. That means people come to the location both for caving and trekking. They can also take some pictures inside the cave, which means photography is popular as well.

The Nuance
The fact is the cave is part of nearby Karst Mountains. In terms of size, the cave is not quite big. Once visitors enter it, they might see some nests of swallows there. On the wall the cave, some prehistoric hand paintings are seen clearly. Those are the main attraction of the cave, after all. According to the locals, those paintings have been there since thousands of years ago. Even geologists have approved that fact! Some entrances are available there, so tourists can enter it easily. The thing is the nuance is both damp and dark.

Exploring Beloyot Cave
The name Beloyot means “sour”. Why is the name, exactly? The locals may tell tourists about it. It is said the cave was covered by trees with their super-sour fruits. Due to such fact, the locals gave the name Beloyot to it. The thing is no one knows regarding the prehistoric hand paintings inside the cave. What people know is that those paintings are quite valuable and historical! No wonder, most tourists would come carrying a camera and take some pictures of those objects. As for the tip, it is better to carry a flashlight, as the nuance is dark.

Visiting Beloyot Cave is suitable for trekkers, as well. It is because the location is a bit secluded, surrounded by numerous landscapes. From Merabu Village, tourists need to follow the route to reach the location. Approximately, it takes about 2 hours. Not to mention they must pass through a forest, river, swamp, and grassland. Once they have reached the foot of the mountain, the mouth of the cave would be seen. Near to the site, there is also a fountain with its clear and fresh water.

Apart from exploring the interior of Beloyot Cave, tourists have an opportunity to climb the op of the cave. The views are definitely breathtaking and the location features beautiful vegetation and the songs of local birds. At the end of the journey, tourists can rest in Merabu Village and try some local foods. The thing is no nearby accommodations available. They would get lucky if villagers offer a free room to them. If not, visiting Berau City becomes an alternative.

How to Get There
For outsiders, they need to visit Balikpapan City by airplane. Next, they may take a bus to Berau City and head to Kelay Sub-district. The next destination is Merabu Village, but it won’t take much time. Another trip is by walking for about 2 hours to reach the cave. That’s all.

Where to Stay
Hotels in Berau City