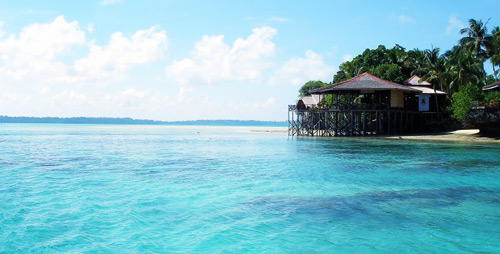 In East Kalimantan Province, there is a small archipelago called Derawan. It is a no brainer. Derawan becomes the prime island of such archipelago and is considered the most famous one among its neighbors. Since 2005, the island has been discussed to be the next UNESCO’s heritage site due to its beauty and nature richness. Today, travelers keep coming to Derawan to enjoy stunning nuance in the beach. It is also famous for its diving spots and different types of sea creatures. For those who love snorkeling and diving, the island should be their next vacation destination!

The Nuance
In terms of size, the island is considered moderate. It features numerous nature attractions like coconut trees, white sand beach, cottages, and beautiful sea scenery. The waves are calm and the color of the water is blue. In fact, some parts of the water are crystal clear, emitting pristine ambiance. Sometimes, several sea turtles and colorful fishes are seen in the shorelines! They are definitely attractive! Next, there is a small resort located near to the beach and it features a pier. No wonder, some speedboats often drop by there.

Exploring Derawan Island
As mentioned before, Derawan Island is popular for its diving tourism. It features several diving spots with distinct depth. Still, most of the visitors might choose one that has 5 meters of depth. They are interested in witnessing different types of sea creatures like ghost pipefish, cuttlefish, seahorses, lobsters, scorpion fish, ribbon eels, and much more! All of them live abundantly in the sea around Derawan. This explains why UNESCO considers it as a valuable diving center. In terms of popularity, the island also has obtained a good name among travelers.

Apart from sea creatures, Derawan Island also has a famous coral called Blue Trigger Wall. The length of the coral is about 18 meters and it becomes the home of red-toothed triggerfishes. Some people say it is the main attraction during diving. Though, other attractions are also available, including black manta rays. Their size is indeed enormous, reaching 6 meters in width. The other majestic sea creatures are dugongs, whales, green sea turtles, dolphins, and much more. In fact, some whales are seen sometimes! With lots of nautical attractions, all divers would spend hours in the water.

Both local and foreign tourists are interested in going diving in Derawan Island. That means it has become an high-quality diving spot! On top of that, many facilities are available like cottages, restaurants, speedboats, and diving equipment. What people need to do is to come to the island and enjoy the adventure. When it comes to diving, visitors can either take advantage of an instructor’s help or go alone.

How to Get There
In terms of accessibility, Derawan Island quite reachable. First, travelers need to take an airplane to Balikpapan City and take another flight to Tanjung Redep. The next destination is Derawan Island and they can rent a speedboat to reach it. As an alternative, they can come by boat from Tarakan or Samarinda.

Maratua island is one of the outer islands in Indonesia that located in Sulawesi Ocean and it bordered with Malaysia. Maratua island is administratively located on Berau regency, East Kalimantan. Maratua is a small and long island, and it has sharply curve at the edge and it located at the south side of Tarakan city. Maratua Island is also part of Derawan Islands.   By the strategic location and the richness of its marine, Maratua island is now popular by the Travelers from many countries. The tourists who give…

Bangkirai Hill Bukit Bangkirai is a natural tourism area which is managed by PT. Inhutani I Unit I Balikpapan. This tourist area is located in Samboja District, Kutai regency, East Kalimantan. Bangkirai hill can be reached by traveling overland for 1.5 hours from the city of Balikpapan. This tour offers the charm of a tropical rain forest that is still natural, and facilitated with some infrastructures like restaurants, hall for meetings, a swimming pool and jungle cottage or cabin. In this area there is a canopy bridge along 64 m…

Bontang Bontang is a city in East Kalimantan province, Indonesia. The city is located about 120 kilometers from Samarinda, directly have border to the East Kutai regency in the north and west, Kutai Kartanegara regency in the south and Regency Makassar Strait in the east. In this city stand three large companies in different fields, Badak NGL (natural gas), East Kalimantan Fertilizer (fertilizer and ammonia), and Indominco Mandiri (Coal) and has a petrochemical industrial area called the Kaltim Industrial Estate. Bontang city itself is oriented in the industrial, services and…

Hotel Deals of the Day